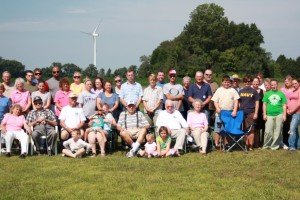 The quiver was full in my grandmother and grandfather’s house as they reared seventeen children in and among Kentucky’s hills, and eventually on the plains of Ohio’s farm land. The picture you see above includes evidence of four subsequent generations enjoying a reunion in 2010.
The motley group includes those who have seen battles in WW II, Korea and Vietnam. There’s a hair stylist in the clan as well as a mechanic who owned his own business and a few homemakers. A truck driver is there as are a few retirees who have bid their 9-5 working days farewell. There are young and old, siblings and in-laws, grandmothers and great-grandmothers, aunts, uncles and cousins. It’s quite a group, and it’s quite a legacy straight from my grandmother and grandfather. (And, it’s not complete as many are missing in this photo. With over fifty 1st cousins, you can imagine the family is quite large.)
Both of my grandparents have passed on, but their legacy has not. It is still alive and burning. Likewise, we too will pass on one day, but we will leave evidence of our life here on earth. What kind of evidence, especially spiritual, will we leave?
Be sure you know the condition of your flocks,
give careful attention to your herds;
for riches do not endure forever,
and a crown is not secure for all generations.
Proverbs 27:23-24 NIV*
It hit me the other day while reading this passage in Proverbs that the crown for our children, grandchildren, nieces, nephews, and beyond is not secure. Complacency would be dangerous territory, as  it’s not an automatic given that they will be walking in the glory of what the Lord has shown us. As those who “go before” them, we must battle to ensure they have opportunity for this same crown we have so overwhelmingly enjoyed to this point.
Have we checked the condition of the flock which lives right under our nose?
Do we know they are saved?
How is their temperature? Are they hot? Hopefully they are neither cold nor lukewarm.
Are they walking steadfastly in the glory of the Lord?
Are they running the race with perseverance?
Are they clothing themselves with His compassion, joy, praise, and more?
We cannot push, pull or force our flocks nor herds to accept the Lord and walk in His glorious riches. However, as warriors in His amazing army, we can press in through prayer, encouragement, and example to fight the spiritual fight so that doors are opened wide for their future.
When our children were young, I prayed they would all accept the Lord Jesus Christ as their Savior. Indeed, and to the glory of the Lord, that prayer has been answered. That is a fantastic place to start. I encourage you to be praying that prayer over your future generations.
Currently I find myself praying for specific strongholds that rear their heads in the children as well as fervent prayers for a depth to their relationship with the Lord. I pray for Holy Spirit wisdom to overflow in them, and that they will never walk away, but will, instead, be steadfast in their love for the Lord. I desire that they have their own riches spiritually, and that their crown will be secure.
Just as the Lord hears my prayers “for” them, He also is working on my own heart so that my example may be His fragrance and aroma to these beautiful offspring. As I allow Him to strip the dirt from my heart, the realness rises forth and the example becomes stronger and stronger. It gives the future generations something  to “hunger” for and follow in the footsteps of.
May I throw encouragement to you today to take measure of the condition of your flocks? As mighty soldiers in the Lord’s army, give careful attention to your herds. Pray for them, encourage them and be the fragrance of Christ as you live day to day.
To God be the glory.
Much Love,
Kristi