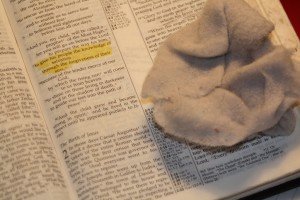 Recently a beautiful scene graced my eyes:  a mother picking out bits of lint from the top of her sweet daughter’s head.  Aaaahh, but in the natural this doesn’t sound too beautiful, does it, watching a mother pick through her kid’s hair?  In the spiritual, though, all that changes. The Lord showed me the sweetness of this picking, the sweetness of our responsibility & privilege as mothers.  It was truly a beautiful thing.

So often our children run here and there, having no clue as to the lint on them, the filth they are carrying around spiritually.  It’s just like my friend’s daughter. She was busy playing and had no idea of the lint in her hair, as she physcially wasn’t able to see it, and honestly, she was at a point where she probably didn’t even care.  Her mother cared for her, though, and took to the business of picking out what didn’t belong.

Our children’s eyes often lack vision; our little (and big) blessings can be blind to the sin that so skillfully conceals itself within their hearts.  These beautiful children are busy running here and there, playing with fervency, living without a clue as to the spiritual lint they are hauling around. They literally can not see it. That’s the point where our Director calls, “Action!” and we, as mothers, step in to pick that lint, praying for them, training them and loving them.

The privilege of praying for and guiding that child with the Word of God stands firm and ever ready.  We have been given the ability to see those pieces of lint, fighting for the cleanliness of that child.  We have the ability to run to our Abba Father for the strength to help guide that child in the way they should go and to encourage the child to look in Jesus’ direction for freedom from sin. He has the ability to open their eyes and cleanse it, truly washing it away in the sea of forgiveness. (And, our Father even has the same ability with us as adults, so it’s never too late.)

Oftentimes complacency has set in, unfortunately, in my part as a mother. I, along with my children, find ourselves running around with a lint-filled head. I’m grateful for my Father showing me that scene and I’m grateful that complacency doesn’t have to win. Today’s not too late to be more fervent with “picking the lint.”  With His love and vision, it’s time to pour forth in prayer and love, watching those young and not-so-young children grow and become stronger in the spirit.

As with John the Baptist, so goes the prayer for all our children:

And the child grew and became strong in spirit;
Luke 1:80a NIV*