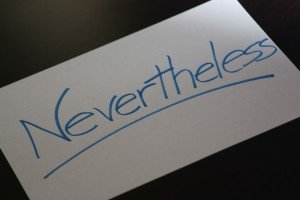 David and all the Israelites marched to Jerusalem, that is, Jebus.
The Jebusites who lived there said to David,
“You will not get in here.”
Nevertheless, David captured the fortress of Zion, the City of David.
1 Chronicles 11:4-5 NIV*
God has a call on your life. Oftentimes, while on the path with the Lord in route to that calling we encounter necessary battles in order to inhabit the land the Lord has called us to. With fleshly eyes the battles can appear scary or overwhelming.  Yet, with righteous eyes we see opportunity and the ability to dwell in the land He has called us to.
I love the word “nevertheless.” It’s such an encourager.  It states that even though the wall in front of us may appear tall and looming, and even though those voices say, “You can’t do it!”, with God all things are possible.
Nevertheless, He is on your side if you are His.
Nevertheless, His power is far above any other.
Nevertheless, with God all things are possible…even scaling that tall wall and quieting those voices of disbelief as you battle with His strength and take possession of the land which He has called you to.
In those times where faith waivers, be encouraged to remember….
Nevertheless!
He Is,
Kristi